Skip to content
on Sep 21, 2018May 11, 2020
CARTESIAN RIGOR VS COMPROMISED FRAGMENTATION
” This is no an easy book. It requires professional commitment and close visual attention, and is not for those architects who, lest they offend them, pluck out their eyes”
Vincent Scully
Professor Emiretus, Historian
Yale University
The architectural & theoretical work of Robert Venturi in American context can only be compared with the work Aldo Rossi’s work in Europe. This is perhaps the time frame that various theoretician across the western globe began to raise the question on modern manifesto and controlled order of Cartesian system. If one looks at the time frame carefully, its the time of early sixties till late seventies where the architecture suffered from heavy handed of high modern & no-where manifestation in practice domain. In the same time the large pause and vaccum in academic domain filled with complex theoretical discourse on architecture and context. The “Imagebiliy” by Kevin Lynch along with Robert Venturi’s treatise “Complexity and Contradiction in Architecture in 1960, while Aldo Rossi’s work on “Architecture of the City” and Leon Krier’s “Rational Architecture”in early seventies meant a lot to ponder about architecture and modernity.
The Complexity and Contradiction brings about the cultural discourse as main theoretical ideals as compared to Architecture of the City, which brings about the question on Historic-ism.  Both the ideals raises not only the theoretical question within academic space but had far reaching consequences in practice domain as well. The word “Post Modernism” began to propel and re-interpreted in architecture across the globe, as some would define it as cultural logic of late capitalism while others would define in terms of culturally and historically relative construction of truth.
The contribution of Robert Venturi’s work (Theoretical and Buildings) is an important lesson when one begin to construct the architectural discourse in post-war era. It brings about rigorous pluralistic, thought provoking, experiential  and refreshing thought during the phase on intellectual fatigue after overdose modern representation of our everyday reality.
Robert Venturi brings about the chapter on contradiction juxtaposed, highlight the vivid ideas of tensions and scaling as an tectonic device in populist sense & as an contradiction adaptation process. The Lieb House is a classic example of scaling and popular image, bringing about parody to the mass consumption (Radio) 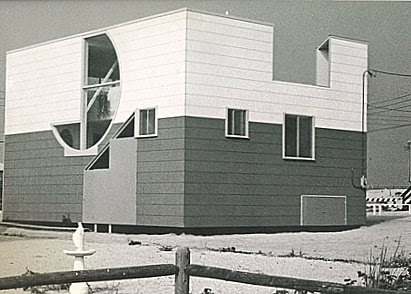 Credit: elseplace for all architecture, January 29, 2009
While the idea of memory, appropriation of parody and nostalgia is critically associated with the project ” Ghost House”, Franklin Benjamin square. The archaeological palimpsest of left over, formation of public plaza as neighborhood space are important manifestation while perceptual engagement in seeking clarity in the assemblage of  historical event with new functions makes the work far more critical than many of his contemporaries.

Credit: Blog: Futility Closet
Much of Venturi’s work remained in postmodern rethinking on function of art and architecture on one side while the role of an institutions in producing or reshaping the meaning (absolute to relative) on other side. The profession of architecture shall always remain in-debt to Robert Venturi’s work and concerns.