Skip to content
on Oct 15, 2015May 11, 2020
The tomb of master Muhammad Ghaus lies near the central market and visibly close to the Gwalior fort. The magnificent architecture is not easily accessible or visible. The Muhammad Ghaus was master composer during Mughal times. The architecture of mausoleum is typologically different from many tomb structures of Maghul times.
It demonstrates the various architectural influences of time. The central burial place is surrounded by another space,  like space within a space,  which is layered with wonderful jali work. The four minarets and central tomb resemble the volumetric composition of architecture of North and Central regions.
The next to the monument lies the tomb of Tansen. The structure is rather underplayed due to its presence next to the monument. The articulated plinth with pavilion structure for burial place defines the simplicity of architecture that perhaps attempt to the imbibe the life of masters of Indian classical music. 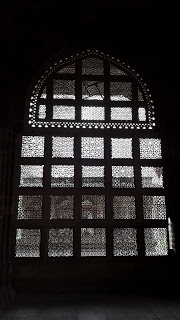