Skip to content
on Feb 27, 2014May 11, 2020
The ancient scripture on architecture prescribes the symbiotic relation of water and buildings & the  imagination of such (non) building type always historically preoccupied with presence of shrine prominence. The profound belief of symbiotic relation of water and nature found its resolution in architecture in various part of India namely temple and kund. Perhaps the ritual significance also allowed the elaboration of built (non) object with intricate detailing almost analogous to festivity adding it to     simple event & pleasure.
The most significance typology of such celebration and festivity are step wells. It is indeed intriguing that such typology was ever visualized as an architecture marvel. Some of the step wells were built next to the shrine while some of them built in isolation. This aspect also brings the questions that, was the typology extracted from symbiotic relation and made it to be a public architecture. The sacredness of this water shrines (monument) are evident from the various types of rituals that were performed on the edge of the wells. The purpose may be mythical but the main function of step wells almost stating the scarcity of water in the dry and arid region. But the typology almost became the integral part of daily life, may it be social or ritual, and that perhaps brings the question of architecture and didactic intent. The step well typology were also connected to the trade and ceremonial route which were subsequently used be next generation of ruler.
Historically the presence of step wells prominence is traced in myth and epic stories that revolves around. As in one of the local ode/ folk song (5th standard Guajarati Text Book) narrating the sacrificial of newly married couple in step wells,  step by step descending down into the well, a mythical homage to water body and promise for abundant water resource for coming years. 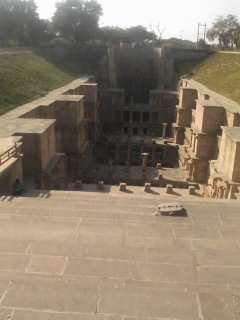 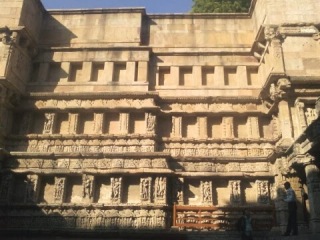