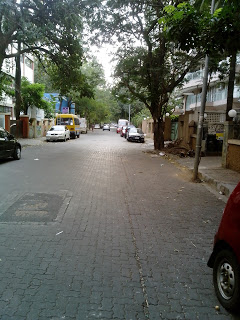 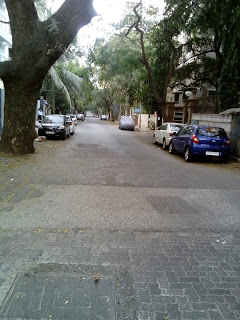 The quite evening stroll through the inner lanes on designated footpaths, cross junctions at ease of traffic and two kilometer of stretch visible to naked eye in the early winter evening. The superficial feel of fresh early winter wind was penetrating as it never was. The casual greetings on roads became less dense and suddenly one could celebrate the anonymity engage the conversation with self. The shadows were longer and suddenly disappearing without the trace. There was suddenly feel for the need for clinical cleanliness which otherwise was hiding in thick garb. The civic sense was at the peak, the left & right alignment of people and car was at its best. The carefully laid paver blocks were visible and noticeable and car perpetually stopped at zebra crossing if one had to cross the road.
The cars are parked as if overnight lesson on paralleled parking is finally learnt by all. The S.V.Road had countable cars/ people & needed long pause for the next count.  The usual four lanes of informal market made the way for virtually non-visible high end shopping. For the first time that sky walks had more pedestrians than the market road at ground. The doors became more skeptical and  windows suddenly began to work like lens of a voyeurism. The architecture began to displaces itself from being run down to run over. It was a strange scene of a movie that never was shot with keen eye or self desirable of wanting. It was rather that eye which hovered for all these years with utter disdain for silence.