It all began with the theoretical idea of space & syntax analogue aided by software to understand & represent the urban mat based on its phenomenal properties. It began to look tentative initially since computer parameter deciding the urban phenomenon seems far from even perceptional questions. As workshop started with the site visits & bringing the data back to the studio, it gave complete new dimensions to our ignorant perception. The map began to appear with complex web overlaid along with gradation that supposes to connote the visibility & accessibility criteria. The line thickness and gradation became the representational tool for understanding complex urban phenomenon. One can change the parameter and bring in the new values or coordinates which may become subservient to the nature of research one want to carry out. It is possible to bring in the new coordinate system which is incongruous in nature and perhaps that incongruity may be an important attribute for carrying out the accord surgery. It perhaps allows the discord attributes to morph to have urban form accord.

The joint workshops with TU always have been an experience to cherish. More than any reason It’s perhaps the social & cultural seamless condition that we share. KRVIA Master’s students are definitely benefited with the exposure however It has been intellectually profiting on both side. 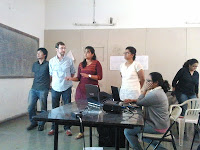 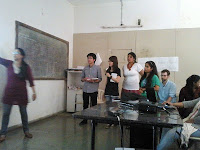